Abyss in the Streets | Pathfinder Wrath of the Righteous Wiki

Abyss in the Streets is a Quest in Pathfinder: Wrath of the Righteous. Quests can provide unique adventuring experience, as well as powerful gears and treasures. Some quests are time-limited and some can only be completed with certain companions.

Abyss in the Streets Information

The wealthy quarter. Verdant gardens and gleaming shop windows, well-to-do townsfolk strolling down pristine pavements... All that is in the past. The Abyss has yawned open, expelling a ravenous horde of monsters, and now the quarter is an arena of brutal street battles. Will the escapees find a way around the enemy — while avoiding coming under attack from their own side?

Abyss in the Streets Objectives

Find a way out of the rich quarter

Abyss in the Streets Walkthrough 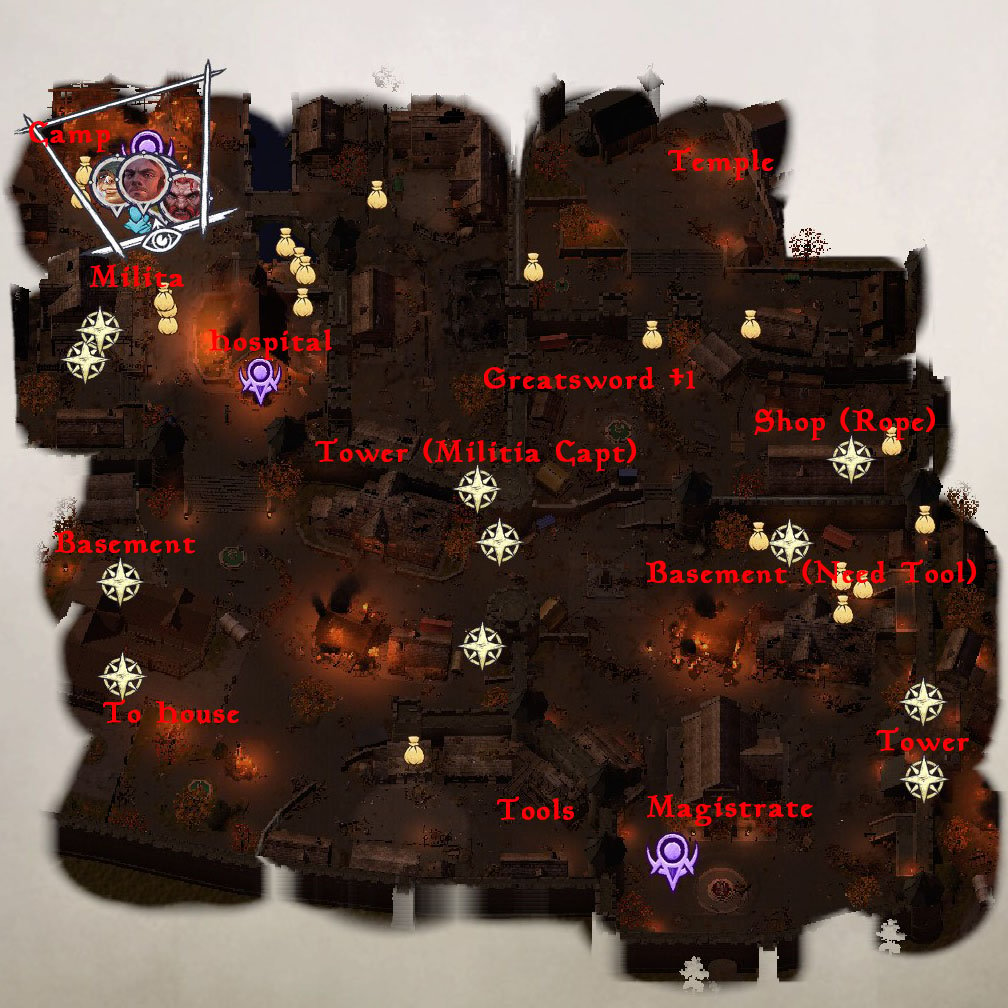 If Frada is alive, speak to Magistrate Pelle Vezilley on upper level of the church to complete Town Hall Report , you can also trade with him.

Inside the house on west side of the region there are group of robbers. You can trade with them, and successful intimidation will give you access to back room for Wand of Burning Arc and 2x Alchemist's Fire.

In the basement, you can use the levers to clear a way to a chest, contains Masterwork Longbow and Tools.

Inside Alchemist's Shop on east side of the region, you can set camp and loot some potions/ingredients.

In southeast tower you can find another rope, the Gelatinous Monument west of Alchemist's Shop drops Amulet of Natural Armor +1.

Inside the central tower there's Militia captain, agree to help him and find the rest of the militia on northwest.

When you try to leave the area, the inquisitors will reveal that Bemir is actually a criminal. You can hand over him or alert him.

Abyss in the Streets important NPCs

The inquisitors covered the small party's retreat, bravely bringing the fight to... who? Or, rather, what? These monsters are clearly demonic in nature, but their appearance makes the blood of even veteran crusaders run cold. And, what's worse, it appears they are pursuing our ragtag group of escapees.

Abyss in the Streets Tips & Tricks