Join VIP to remove all ads and videos

In Pathfinder: Wrath of the Righteous, you will be able to manage your own crusader army. Armies in Pathfinder: Wrath of the Righteous is a crucial part of your adventure. You need to recruit different soldiers - Infantry, Archers, and Paladins and keep them paid. You need to maintain their morale, calculate their movement, and help them earn more experience to gain Army Power. Your dedication to army management decides whether you can successfully accomplish the crusade or not.

Your Mythic Path will also have a great influence on Crusade Army, depending on your actions and alignment, some allies might join or leave the Crusade, triggering various outcomes later in the game. Relationships with your companions, who are helping you by being your councilors in the Crusade, will be affected as well.

Note (Important): You can turn on Crusade Auto Mode if you want to skip this part of the game. In this mode, the strategic management of the crusade is carried out without the player. The inclusion of this mode is irreversible, it will not entail changes in the plot and makes the defeat of the crusader armies impossible.

Note: When you are on Strategy map mode, your army legions and players' movement are independent. Meaning you can send one of your legions to attack a city, another to hold your campsite, while your character visiting the third region.

Note: When you recruit new units, they will form a new legion appearing at Kenabres. (At Drezen after you retake that city.)

Note: If a road is blocked by a hostile fort, your character cannot pass it before sending an army to defeat it.

Note: Occasionally your army will find treasures after a victory.

You can spend financies to recruit more units. Finances generates with time and can be purchased by gold or rewarded by complete crusader quests. (Defeat demon armies and take demonic fortress etc.) Later, you can build buildings to increase your Finances.

Your newly recruited army appears at Kenabres/Drezen. Move it to one of your other armies to merge them. (Press Shift and drag the units.)  Note though that an army can have no more than 3 units as such (of any type).  This limit can be increased with Generals (army leaders) that have or obtain certain feats.

You can buy and assigned a leader to any of your legions (called Generals). Army Leaders earn experience after each victory won, and can unlock useful traits (feats) to strengthen the army. Army leaders can cast spells to hurt the enemy or raise the fallen.

After defeating any demon army, the Banner of Victories will become green for 7 days, then yellow for 4 days, then red.

After capturing any demon fort, the Banner of Conquest will become green for 20 days, then yellow for 7 days, then red.

How do battles work

When your legion meets an army of hostile faction, the game will enter battle mode. (Heroes of Might and Magic style) 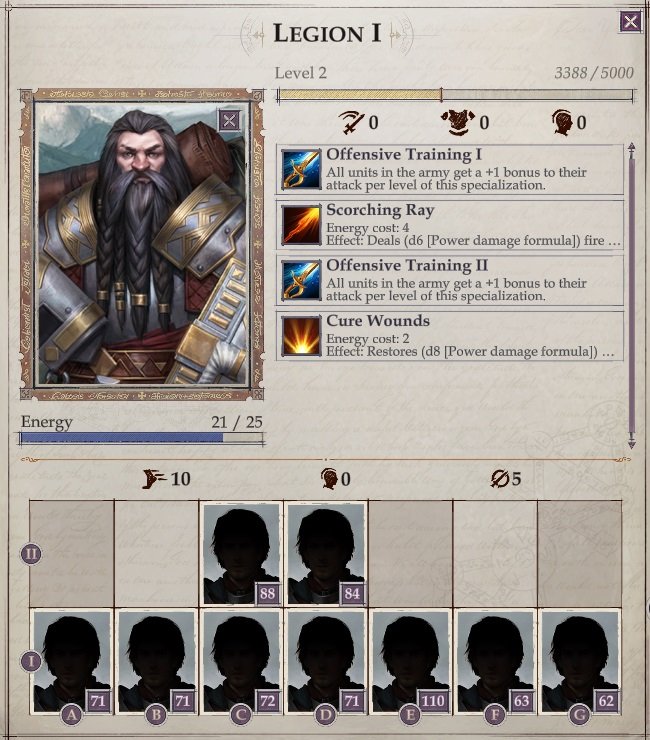 You can place your melee units in the first line, and the ranged units at the second line for better protection.  If you have a large number of units, you can split them into several smaller troops so they don't overkill weaker opponents. 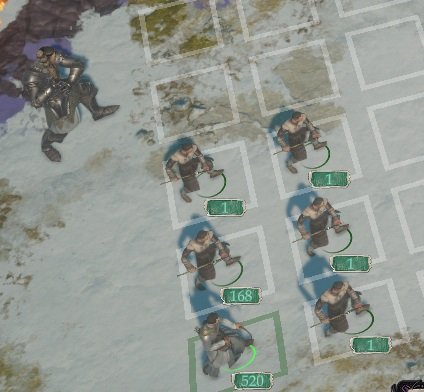 If you have high unit cap, you can split your cheapest melee unit into multiple 1 man troops. Use them as shields to protect the real valuable assets. You can also use these 1 man troops for hit & run tactics. Lure enemies into chasing your cheap cannon fodder, while your archers can have easy kills. (Most demon armies lack ranged units, the longer you stall them, the more damage your archer can deal.)

After the battle, some of your fallen units can be healed. (You can increase the heal capabilities by Leader skills)

Important Note: Make sure you assign a leader to your  main legion and learn the Cure Wounds ability as fast as possible for it can revive fallen units in the battle. Don't end the battle prematurely before you raised all your fallen units or used all the energies. Simply weaken the enemy to only a handful of units left, then chose to defend, revive all lost units. This way you can defeat most demon army without losing a single unit.

In Pathfinder Wrath of the Righteous, your army consists of all types of units, each has its own strength, cost, and abilities. You must make your recruit plan carefully and use them wisely to defeat the demonic force at World Wounds.

When you upgrade your Military Rank, you will have the opportunity to upgrade your units to more powerful troops.

Army Types in Pathfinder: Wrath of the Righteous

Note: Each week you can only recruit a limited number of certain units.

In order to gain more resources, you need to complete crusade Quests to increase the daily income. You can also spend your own money to buy resources.

In Pathfinder: Wrath of the Righteous, you can build multiple buildings after you have taken the Drezen. They provide useful resources and troops to the crusade.

Pathfinder: Wrath of the Righteous Buildings

Every legion of your army has limited movement point (40 by default), which decides how far can they march. Each day, the movement points resets.

When you combine two different legions into one (Legions can be merged when they are at same location, but the units in a legion cant breach the unit cap), the merged legion will have the lower MP of the two.

The morale of an army decides how eager they are to fight the enemies. When your units charge the enemy during combat, they will roll a d100 plus their current morale to determine how much additional damage they cause.

Each army, whether it belongs to crusader faction or the demon faction has an estimated army power score, this represents how powerful this army is. Generally speaking, you should avoid fighting an army with higher estimated army power than yours. Try to find another way to reach your destination.

Certain types of enemies may be more deadly than the Estimated Army Power shows. For example, gargoyles blocking the path to Reliable Redoubt has an estimated army power of 4. But they are flying units and your troops only do limited damage to them without the anti-air upgrade, so be careful when fighting armies of special units.