Join VIP to remove all ads and videos

Enemies in Pathfinder: Wrath of the Righteous include all the hostile creatures in the game that will attack you when they become aware of your presence until you are defeated or you defeat them first. Enemies are presented in all forms and sizes. Defeating Enemies grants XP and various drops that reward players with useful Items.

Enemies are shown highlighted in red during Combat, and connected to their objectives by a dotted line.

Enemies in Pathfinder: Wrath of the Righteous

The main Enemies in Pathfinder: Wrath of the Righteous are Demons, malign and evil creatures native to the Abyss, an evil-ruled plane contained within the Outer Sphere. They arose from the Abyss to haunt Golarion, a planet at war between two worlds: an ordinary world inhabited by ordinary beings, and the Worldwound, a wasteland conquered by highly-destructive demonic creatures.

Demons originate from the interaction of  surviving larvae-shaped mortal's souls (sentenced by Pharasma's Court to the Abyss) and the essence of the Abyss itself.
Each Demon, born of the sinful soul of one or more mortals, is conditioned by the perversion and wrongdoings of that individual during their life. They take different shapes and forms, mostly growing from their of larvae appearance, though some are not larvae-derived Demons, as is the case with beings born out of copulation or evolution. 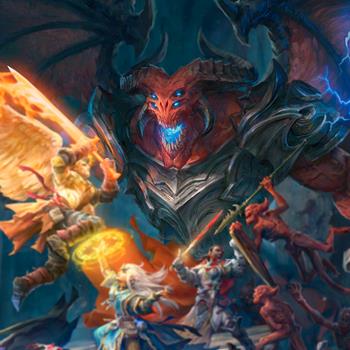 Demons in Pathfinder: Wrath of the Righteous