In the Belly of the Beast is a Quest in Pathfinder: Wrath of the Righteous. Quests can provide unique adventuring experience, as well as powerful gears and treasures. Some quests are time-limited and some can only be completed with certain companions.

In the Belly of the Beast Information

The demons used dark magic to move the Commander to the Ivory Labyrinth - a prison thast is almost impossible to escape. The Ivory Labyrinth'a grim reputation is enough to deter any attempts at freedom. Even the name itself fills the heart with despair, and those who hear it find themselves deprived of the will to survive, and the strength to escape.

In the Belly of the Beast Objectives

A mysterious benefactor has come to the Commander's rescue. Hidden by a spell of invisibility, the Commander can now leave the cage and look for a way to escape. However, he should be cautious. The prison guards are trained to hunt down fugitives, and it would be unwise to undersestimate them. 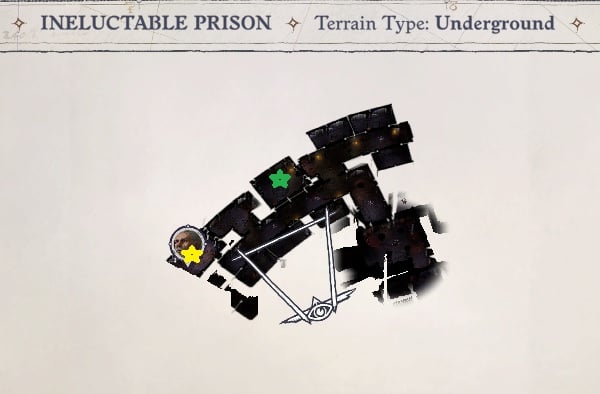 Using the Greater Invisibility you've been granted, you need to manoeuver to the green star above.  There you will find your gear.  After that, head to the yellow star to escape.  This Greater Invisibility does not expire in a few rounds as it might if the player cast it.  The buff is granted by someone else, and has a long duration.  However, it pops if you take an aggressive action, and as noted, a number of mobs can see through it.

Your invisibility will not protect you if you move within touch range of a minotaur, or if the demodands see you.  You can open prison cells and deke inside to avoid being seen.  Using demonic charge in sight of anyone will usually set them off as well.  It is not necessary to use demonic charge to escape the dungeon nor to retrieve your stuff.

The exit looks like a wall, but if you walk up to it, it should reveal itself.

If you kick off a fight in here, you're probably going to die as every mob will aggro, so don't be afraid to save-scum.

In the Belly of the Beast Walkthrough

You will be yeeted here from a rest/dream sequence.  A cut-scene will play and eventually you'll start being tortured.  During the torture, you will need to make various checks (Bluff and Intimidate mostly).  Information you give up here may affect quest lines.

Eventually, you'll be left alone and a mysterious benefactor will help you out with some exposition and a long-lasting Greater Invisibility effect.  You must skulk around and get your stuff, then escape.  The benefactor will guide you, but the advice isn't as helpful as you might expect, which is why I am here today writing this down once and for all.

Wait for any demodands to walk out of range, then work your way up to your gear.  Once you've retrieved your inventory, follow the same movement process to get to the exit.

In the Belly of the Beast important NPCs

Tarry Demodand - these will see through invisibility at short range

Assorted Minotaurs - do not touch or they will see through invisibility

In the Belly of the Beast Completed quest information

For the first time in many centuries, a prisoner of the Ivory Labyrinth has managed to escape. Hepzamirah must face the disgrace of letting a captive escape her grasp. But it was foolish of Baphomet to rely on the security of this prison. After all, when he was held prisoned within its walls, he also found a way to freedom.

In the Belly of the Beast Tips & Tricks