Devoured by Darkness | Pathfinder Wrath of the Righteous Wiki

Devoured by Darkness is a Quest in Pathfinder: Wrath of the Righteous.

The festival organized to raise the spirits of the city has ended in death and destruction. Those lucky enough to survive ended up in the ancient catacombs beneath Kenabres, catacombs in which, so the rumors say, live a brood of bloodthirsty humanoid creatures.

Find the way up

Rest in the hut

Find the way through the Shield Maze

After finishing  Day of the City, you will fall into the hole created by Deskari. Once you wake up in the underground, you regain control. Go right and you will find Anevia and Seelah. Interact with them to earn 125 Experience. Seelah will ask for your help:

Anevia and Seelah will introduce themselves to you, and talk about the demon's invasion and the fall of Terendelev and will proceed to ask about you. Once introductions are in order, Seelah will join your party. She's a Paladin (See Builds if you are not sure how to develop her character)

Move forward, you will eventually find a chest containing the weapons Hulrun confiscated before the festival. You can find:

Ahead of the chest is one of Terendelev's Scale. Continue moving forward, and you will meet Camellia who will join your party. When the conversation ends you earn 125 Experience and you can loot the dead body of Aravashnial next to Camellia, to obtain a Masterwork Dagger.

There are a number of enemies as you progress along the path:

Eventually, you will reach a broken archway with some collapsed columns and Lann and Wenduag.  Lann will tell you that they are looking for a holy Angelic sword. Once the conversation ends, you will earn 300 Experience.

Lann and Wenduag will ask you about the whereabouts of the sword and will join your party.

Accessing the next area requires passing a Mobility (14) check.

The following path contains a number of enemies:

There is a branching path requiring a Mobility (11) check containing:

At the end of the path a cutscene will trigger. Wenduag will talk to you privately and ask you to not show the Light of Heaven to Chief Sull.

Leave the area, and you will reach the Mongrel Settlement. You will meet Chief Sull and gain 250 Experience.

Note: You will be presented with the choice of revealing the Light of Heaven or hiding it. This is a significant choice impacting the rest of the Prologue.

Moving into the wider village will introduce you to Horgus Gwerm, one of the richest and most distinguished men in Kenabres.

You will be able to rest in a hut in the North of the Village.

Head to the northeastern part of the map to leave to village.

Note: The route diverges slightly based on whether Lann or Wenduag is your companion, though the overall route remains the same. 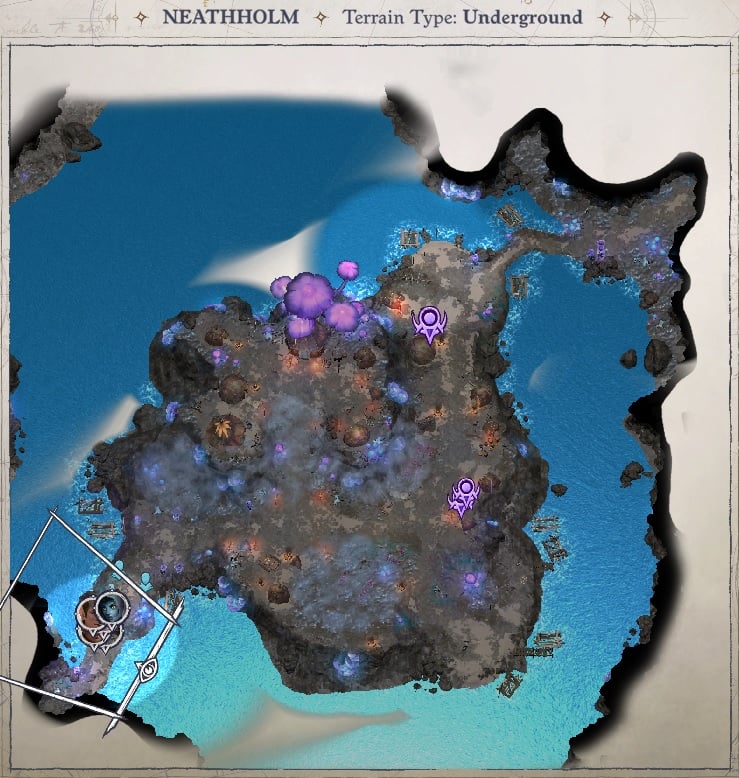 Follow the path to the gate. When you are in the gate, move forward for a Lore (Religion) (5) check to notice a bas relief of Baphomet, a Demon Lord.

The Shield Maze contains a number of Enemies and Traps: 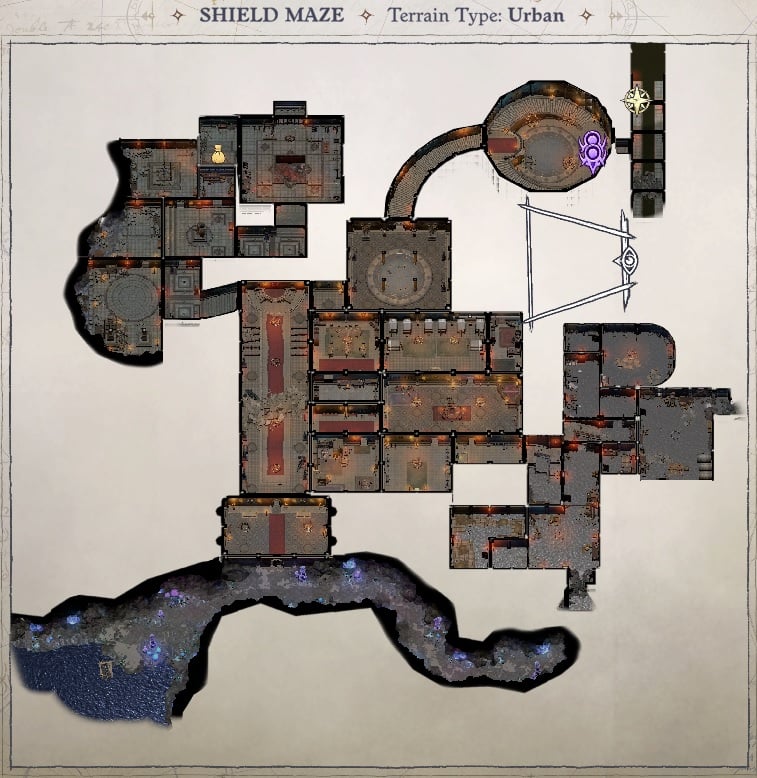 There is one puzzle within the Shield Maze. In the center of the map, there is a large room with paintings mounted on the walls, and each painting has a color associated with it. The solution to the puzzle is to select the gems in the same order as the paintings: Yellow, Blue, Red, Yellow.

The Water Elemental is a powerful enemy for new adventurers. It has the Greater Cleave ability (allowing it to hit multiple characters) and 5 Damage Reduction on all damage.

The following potions can be used to substantially decrease this combat's difficulty:

At the end of the Area you will meet a four-armed demon, Savamelekh, for the first time and Hosilla.

In response to their actions you will have the option to call on one of your Mythic Powers:

This will have a minor impact on how subsequent characters respond to you.

When you enter the scene Savamelekh will flee, and you will have to face Hosilla.

This fight is considerably easier with Wenduag joining the fight. Otherwise you will also be forced to fight Wenduag as well.

Anevia and Chief Sull will appear and talk about the situation. You will receive Cultist's Dispatch and earn the Spies Amidst Our Ranks Quest.

Keep moving past the NPCs and turn left to go upstairs. Any remaining loot you may have forgotten to obtain from defeated Enemies will appear now. Upstairs you will find Irabeth and finish the Quest.

The dead body by Camellia belongs to Aravashnial, a more substantial companion in the Adventure Path.