A Threat to This World | Pathfinder Wrath of the Righteous Wiki

A Threat to This World is a Quest in Pathfinder: Wrath of the Righteous. Quests can provide unique adventuring experience, as well as powerful gears and treasures. Some quests are time-limited and some can only be completed with certain companions.

A Threat to This World Information

Life is full of Paradoxes. Sometimes, in order to reach a destination, one must go in the opposite direction. The Commander, wishing to reach the heart of Threshold and there determine the future of Golarion, has been forced to retreat from the fortress and walk in the other direction. The things one does to save the world.

A Threat to This World Objectives

Identify the source of the anomalies.

Explore the other side of Threshold.

A Threat to This World Walkthrough

Iz is different from the last time you visit it, Wintersun tribe has moved into this region, lead by their Chief Marhevok. However, the more you explore this area, the more you find Marhevok suspicious. In order to confront him, find at least 3 of the 4 leads:

In the south central area, loot Donkey's Moss from the vase for His Majesty's Anguish.

After the confrontation, Marhevok escape the hall. Defeat his dragon and pursue him through the ice pool. (After the battle, loot Dragon's Heirloom.)

Defeat Marhevok again and search the area, loot the body for Unusual Gear, Frost Embrace and Fixed Obsession. (On another platform, there is a Rusty Key. Use the Rusty Key on the mechanism near the entrance to remove the obstacles, later you can use the unique Mass Dimensional Door ability to explore the platforms there and get a Headband of Mental Perfrection +8 and a Bracer of Armor +9) 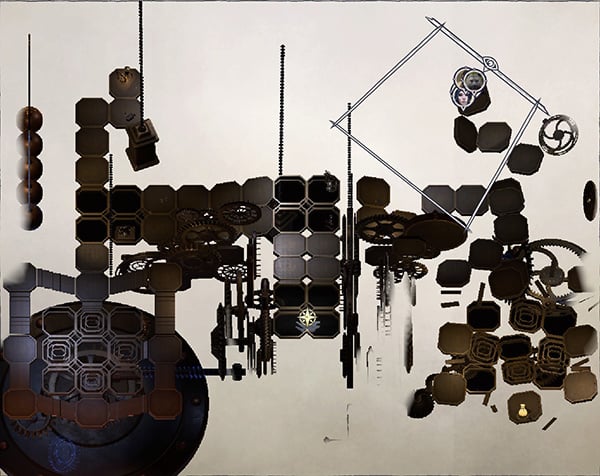 Leave the place, "Marhevok" shows up again and encourage Commander to explore the other side of Threshold.

After you returned to Threshold, you can talk to the NPCs in crusader camp to get their errands (Storyteller, Hilor and Anevia). In southern part of the map, use the Unusual Gear found on Marhevok to enter Other Side of Threshold.

After the initial battle, a voice will taunt you. Look around for a way out and pass the Arcana 51 check to find your next move (the balcony above). Otherwise you must fight. Either way you gain a unique Dimensional Door - Mass ability, you can use it to travel between different platforms. (Sometimes, you need to pull levers to remove obstacles. Also beware of the traps.)

The Mechanism Lever can be found in Abyss-style house. The other house on another platfrom provides you a place to rest. In one of the chest near the house platform, there's a Flawless Bracer of Armor +9. 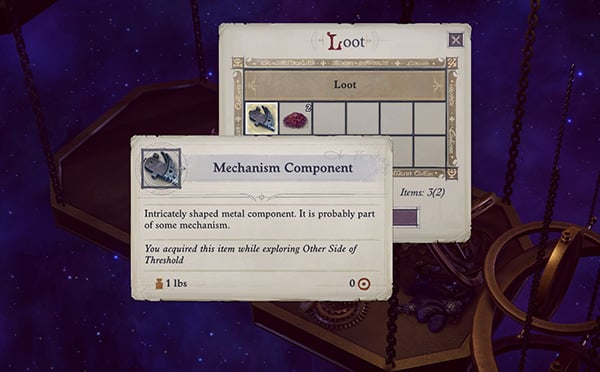 You can explore the map counter clockwise, at the southwest corner you can find a Mechanism Component. Use it on the mechanism at northwest corner. You can now pull the lever of the platform on east to activate giant clock, it shows the combination of wheel puzzle.

Use the combination (VI - III - XII - IX), then pull the lever removes the obstacles to the a nearby platform. You will find Unbending Kolyarut, the guardian of Keystone here. Use paradox to trick and defeat him gives you a Gloves of Entropy. If you are an Aeon, you can take control of him and order him to leave. Next to Unbending Kolyarut, loot the "chests" for Greater Phylactery of Negative Channeling.

Return to the top area. This time, hit the mechanism in the east corner (in the area where the large circle on the floor can be found). Doing so will make a house appear. Enter and defeat Deep Shadow of Frost and the rest enemies. Loot Mechanism Lever in the back and use it on the mechanism in the south corner just outside the house. Use the mechanism afterward then teleport to the south platform above.

In the west corner, loot Protean Behaviour, Minutes from a Council Meeting. Ignore the mechanism here for now and teleport up and south once more. Ignore the "A" and "B" mechanisms for now and teleport eastward and upward to the pink light. Hit the switch you find here to make a new platform appear below. Use the green portal to drop down, then head south along the new platform, travel all the way to the southeast corner.

Once you reached the keystone, defeat the enemies there and Ssila'meshnik will show up and tells you the situation. Agree to work with him gives He Whos Sows Chaos, work with Valmallo gives Upholding Order. (Or you can cheat both and work with Areelu, quest Paradox)

Before you leave through the portal, you can clear the area first. drop down to the previous path of platforms you used to get here. Teleport down and loot the body to acquire Modus of the Subconscious, Inevitable Manual (includes hints for puzzles). Hit the switch to summon Axiomite enemies across the map. Kill each of them in order (Cental East, Northwest and Southwest), taking the Key Plate from each group.

At the southwest platform, insert each of the Key Plates into the "A", "B", and "C" slots on the broken device in the corner. The order is 1, 10, and 11, respectively. Once placed correctly, you'll hear a confirmation ring. Hit the switch to make a copy of the Wardstone appear. Click it to receive the First Memories permanent buff, which will grant your main character conditional immunity to critical hits.

Next, travel through the green portals in the same order you solved the cloak puzzle (VI - III - XII - IX). Once you go through the IX portal, you'll find yourself in a new area. Loot Intricate Component from the chests. Which can be used after you complete all errands for some loots.

Return to the Threshold exit (southeast). Loot the chest to find The Unveiler, then head back outside to meet Valmallos. Regardless of what you say or do, the quest will conclude and you'll be sent to defend the repository exit from Ssila'meshnik. However, if you want the secret ending, you should pass the Perception 53 check and ask Valmallos about Areelu's excess mythic power.

A Threat to This World important NPCs

A Threat to This World Completed quest information

A Threat to This World Tips & Tricks